We are very excited to share some details of the recent laneway transformation project that has been completed by the Downtown Vancouver Business Improvement Association (DVBIA).

Snéḵwem lane is located right by VGC’s Granville campus in Downtown Vancouver at Granville and Pender Street, and features the Squamish story of the Salmon People. The mural is part of an initiative called Re-Imagine Downtown Vancouver. The initiative aims to create more inclusive experiences and spaces in the city over the next 25 years.

The story behind Snéḵwem lane

The mural design is a collaborative artistic vision between artists James Harry and Lauren Brevner. They turned the grey laneway into a bright, visual feast with blue, yellow, and salmon-red colours. The 6,500-square-foot masterpiece was painted in October and took about 14 days to paint.

The design is their modern interpretation of a traditional Squamish First Nation story about how the salmon came to Squamish waters. It’s based on the story passed down to Harry by his father. The story speaks of visitors with supernatural powers who, with the help of snékw’em (the sun), led the Squamish people to the village of the salmon people.

The focal point of the mural is a 50-ft feminine figure personifying the spirit of the sun and seven chinook salmon. Chinook salmons are the first salmon species to run every year.

Furthermore, seven is a significant number for Indigenous people as it represents the Seventh Generation Principle — a philosophy that the actions we make now impact the future seven generations. 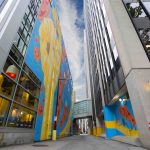 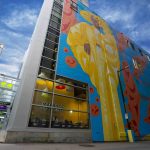 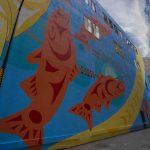 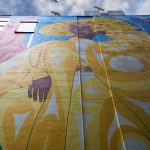 What a way to cap off a glorious May! @vgcactivi