Things to do on the North Shore this winter

North Vancouver is considered the outdoor playground of Vancouver. It stretches from the sea level to the lower slopes of the North Shore mountains. North Van, as many call it, is also located on the traditional territories of several Coast Salish peoples: the Squamish, Tsleil-Waututh and Musqueam nations.

Because of its location, North Vancouver offers countless winter fun from the city to the mountains. So you can go skiing, snowshoeing, hiking, brewery hopping, shopping, and more. With just using public transportation, here’s how you and your friends can spend a day in North Van.

Enjoy the snow on the local mountains

Of course, the first thing we have to start with is the beautiful snowy mountains of the North! The North Shore has three excellent winter resorts that you can easily access by bus. They offer a variety of activities for winter sports enthusiasts, beginners, and even those just looking for a trip to nature. For example, you could rent equipment or take lessons to go skiing, snowboarding, or even snowshoeing. So plan ahead as you will need to book in advance for many of these activities. 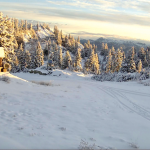 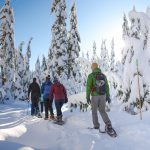 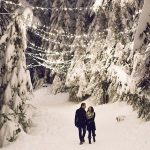 The most well-known mountain of the three is Grouse Mountain. Take the Skyride up to the peak and enjoy breathtaking views of Vancouver, the Pacific Ocean, and the Gulf Islands on the way up. Coupled with a stunning view, visitors can also join the Peak of Christmas seasonal celebration between November 26 and January 3. You can also take a magical “Light Walk”, see real reindeers, go ice skating on their mountaintop pond, and so much more.

Similarly, Cypress Mountain offers jaw-dropping views of the city and was the venue for the 2010 Winter Olympic and Paralympic games. But if you are looking for something with a relaxed West Coast vibe, then family-owned Mt Seymour resort is a great choice. It has also been rated the #1 snowshoeing resort in North America by Snowshoe Magazine! And for those looking for an extra thrill, try snow tubing on both Cypress Mountain’s Gnarly’s Tube Park and Mount Seymour’s Snow Tube Park. Both mountains have shuttle busses that take you right up!

Spend a Day at the Shipyards District 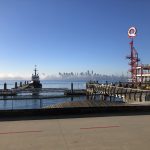 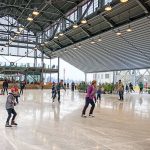 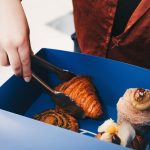 Next up, go on an adventure in the Shipyards District. It is part of the Lower Lonsdale neighborhood that has undergone a massive transformation over the past 5-10 years. To get there you can simply hop on the seabus and get to Lonsdale Quay in less than 15 minutes. After you arrive you can take a stroll along the waterfront and enjoy unobstructed views of Vancouver’s skyline. If you like visiting historical sites, then head over to the Shipyard Commons. This area is a reconstruction of the historic Machine shop from North Vancouver’s Shipbuilding past.

The Shipyards are also home to the largest outdoor ice skating rink in the region. If you’ve always been curious about ice skating then try it for free between December and February while enjoying the beautiful Vancouver skyline. Equipment rental is also available onsite.

If skating isn’t your thing, then try the local shops around the area. If you are looking for some food and great coffee, try Nemesis’ Dope Bakehouse, Tap & Barrel, or the Lonsdale Quay Market. But if you are interested in local artisans then check out the Nooks for the best handmade gifts in BC! There’s also the Shipyards Annual Christmas market, which opens from December 4-5 & December 11-12 and is completely free to attend. Besides that, the Polygon art gallery is a great place to see some of Western Canada’s great photographic and media-based art. As one of the largest non-profits, admissions are by donations.

Get lost in a magical forest – Capilano River Regional Park 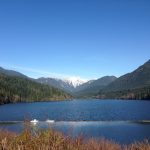 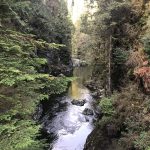 Sure you’ve heard of the Capilano Suspension Bridge, but did you know that there’s actually a massive regional park right behind it! The Capilano Regional Park is completely free to access and has numerous trails just waiting to be discovered. It’s a great local hotspot if you want to avoid crowded tourist sites.

Breathing in the fresh mountain air, it’s easy to forget you’re just a short way from the city. The park is home to the beautiful Capilano Lake and you can even see the iconic Lions Mountains of North Van. Besides that, you will be able to cross the Cleveland Dam. This impressive structure is 91m high and provides pure drinking water for much of the Greater Vancouver region. Moreover, you’ll also see a fishing spot for salmon as you walk through the lush and moss-covered trails of this park. Make sure to keep an eye on the trail map so you don’t get lost!

Go on a brewery tour along the North Shore Ale Trail 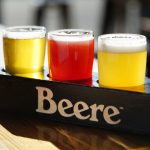 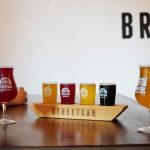 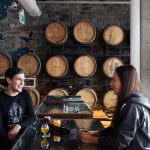 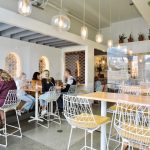 Beer lovers listen up! Did you know that the North Shore is the birthplace of craft beer in Canada and was home to the first microbrewery in Canada? It all started with the Horseshoe Bay Brewery which was opened in 1982. Although it is no longer open, it was the foundation for the craft beer culture that now exists in North Vancouver.

With this in mind, you’re probably wondering how to get started. Because North Vancouver is fast becoming one of the best craft microbrewery destinations on the West Coast, check out the North Shore Ale Trail. Alternatively, if you want to adventure outside North Van, BC Ale Trail is a great resource. It is a series of self-guided itineraries that highlight local craft brewery destinations and the beautiful landscapes that surround them.

But the best part of brewery hopping is that all breweries offer a tasting of their unique creations! So if you are ready to get going, why not join the Shipyards Brewery Crawl on December 27, 2021. Some of the place you can check out near the Shipyards Brewery District are the Green Leaf Brewing, La Cerveceria Astilleors, and North Point Brewing. However, if you prefer to go on your own brewery crawl with friends, then download this map.